Ilima or Hallon, by Paradise Patterns, a review

Basically this low gathered back is what I was talking about here. (However in my dream vision there would be more tiers of gathered ruffles...)

With a great sigh of the inevitable, I put aside all thoughts of making jackets the week this came out. I bought the pattern the day I found it and picked it up from the printer the next day.  My muslin is size 4, B cup, and shortened 1" through the upper bodice lines (to ensure the back won't be too low.)  I made one stupid mistake in cutting my armhole bindings shorter, but in fact they aren't involved in the bodice shortening, obviously, and I had to recut.  I cut the dress as long as my fabric let me, and with no plan to add the bottom ruffle.

I'm not entirely convinced by the angled bias bindings - on one side it meant that the edge wasn't fully covered, but when I put the armhole bias over it, things were fine.  It also doesn't match the pictures in the instructions, and the lengths are not consistent with the length you need- I ended up with a lot of excess to cut off.  The fabric is a lightweight silk cotton. The front neck feels too high - but that might be fixed with the bodice being longer.  The darts are about an inch too high. The drape of the front is very straight compared to all that gathering in the back. 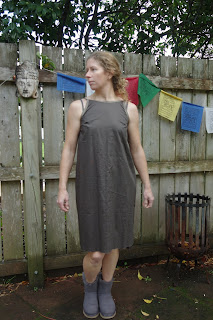 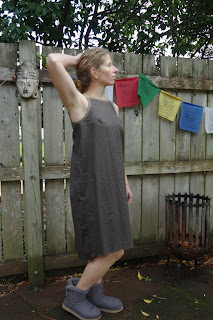 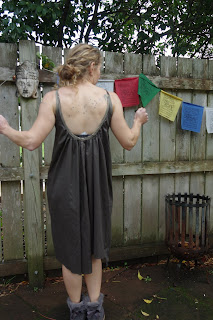 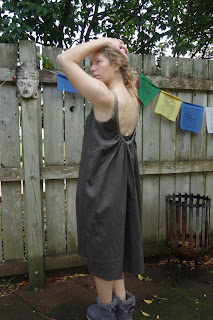 Verdict: don't need that shortening. Got busy with life and didn't carry on with the wearable version for a few months, at which point summer was so long gone.  Ugg season.  Oops.

Made a version according to the pattern in rayon/linen blend.  Maybe I should have started by following the pattern without any changes?  This pattern takes quite a lot of fabric, more than you might think because the back is really wide, so this pink was also the only thing I could find that I had enough of and was willing to experiment with - I had some other tempting fabrics but not enough of them.  I kept the 1" shortening near the hem but went back to the basic pattern otherwise.  I still disliked how the bias lengths are not the right length for size, they are just standard lengths, so you end up trimming a lot off the ends. 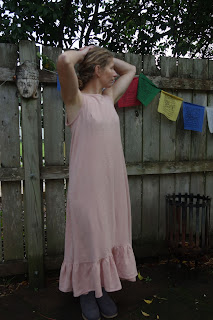 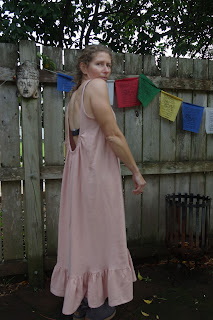 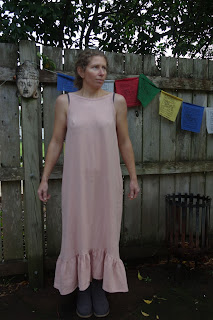 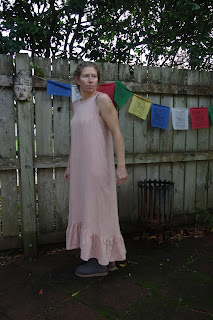 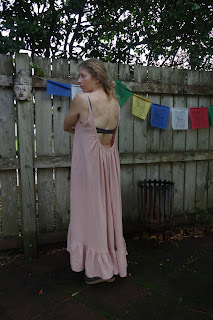 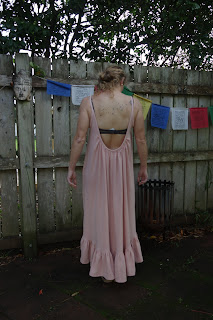 I took a bunch of pictures on my phone without a bra, though I guess the bra is useful as a marker of how much lower the dress hangs without that adjustment.  Obviously the back looks better without. The front, not so much. 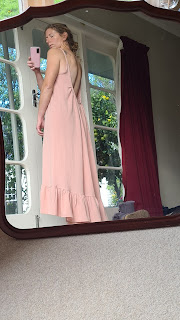 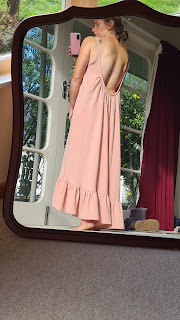 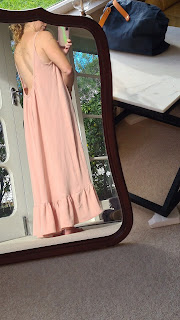 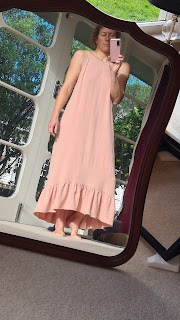 My friends all seem to think I should keep this dress for myself but it's the middle of the winter and freezing so I suspect it will wing its way over to Arizona.  I'm not actually super keen on the fit as is. My friend Regina has a higher tolerance for ruffles than I do.  Plan is to:

shorten 6".  It's just too dramatic

Wedge a bit out of the side back above the gathering, to bring it up enough not to show my waist but without modifying the fit of the front and arms.  Though it's nice the pattern included a way to shorten through the back, in the end you need to be really short for that to work, because it changes the front quite a bit.

I have some lovely textured grey rayon that will wait until October or so when wearing backless dresses again makes some sense.  Overall this pattern is ok.  It's not a super high quality pattern.  You follow the instructions and you will muddle through and get a pretty good result, but to take it to the next level you need to think a bit for yourself.  (Pockets!)

begonia
Raglan, New Zealand
I'm a polyglot globetrotting doctor with an unrelenting need for creative engagement, ie sewing. My friends love me because they get half of what I make. I will love you if you tell me how to sew better! You can reach me at begonia [at] gmail dot com